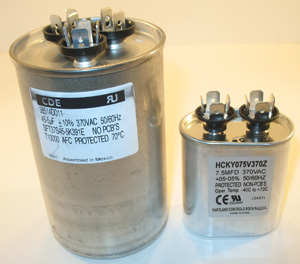 What are Start RUN Capacitors?
Motors used in HVAC such as the condensing fan motors or blower fan motors sometimes need help to start moving and to stay running at a steady pace, with no heavy up and down spikes.

To do this HVAC units use what are called Start and RUN capacitors.

Not all motors will have a start or run capacitor some can start and run by themselves.


Capacitors in HVAC can be separate with two capacitors or can be in a single package.

Here is a Dual Round Capacitor 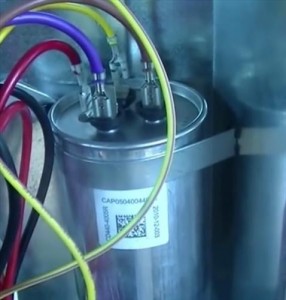 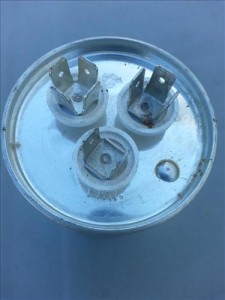 Here is a Single Capacitor 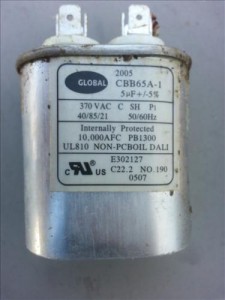 The Dual Round Capacitors are simply the way engineers are trying to save on space and cost.

They could have put two separate capacitors in an HVAC unit but combined them into one package.

How Do They Work In an HVAC System?
A Start or Run Capacitor can be combined into one capacitor called a Dual Capacitor with three leads but can be split between two separate capacitors. The Start Capacitor gives a fan motor the torque it needs to start spinning then stops; while the Run capacitor stays on giving the motor extra torque when needed.


If the Start Capacitor fails the motor will most likely not turn on. If a Run capacitor goes bad then a motor can turn on but the running amperage will be higher than normal causing the motor to run hot and have a short life expectancy.

After replacing a bad Condensing Fan Motor a new Start Run Capacitor should always be installed.

A Dual Capacitor has three connections HERM, FAN, and COM.

If the unit has two capacitors then one is the Run Capacitor and the other is the Start Capacitor. Keep in mind the compressor also often needs a capacitor which will be HERM (compressor).

Buying a New HVAC Capacitor
A new Capacitor should always be installed with a new motor. A capacitor can be bought at an HVAC supply company there is usually at least a few even in a small town, also online Amazon is a good place to look.

The Dual Capacitor is nothing more than two capacitors in the same housing; while the Run oval is a single capacitor and an HVAC system will usually have two.

Capacitors are measured by the Microfarad sometimes shown by the letters uf and Voltage. In any HVAC unit, the capacitor must match the motor. 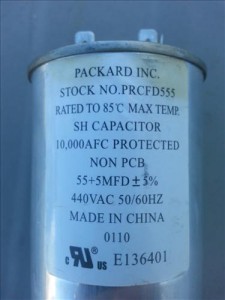 (The + -5 after the MFD is how much it the capacitor tolerance is rated to go up or down.)

To order a replacement for this capacitor it would be 55+5 MFD (uf) and 440 volts AC Dual Run Capacitor.

Here I am using the Fieldpeice HS36 multi meter with an Amp clamp. 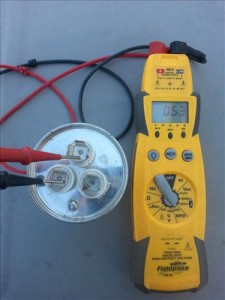 This test is being done on a Dual Run Capacitor 55+5 MFD (uf). The multi meter is on Farads and the leads are on C and FAN (positive and negative do not matter). The lower number is for the fan motor which is rated at 5 MFD (uf), and it reads 5.3 MFD (uf) so it is good. The leads C to Herm can be read also which would be for the compressor.

To test a Run Oval Capacitor simply touch the two leads. This one reads 4.5 MFD (uf) and is rated at 5 MFD (uf), so it is bad and needs replacing. 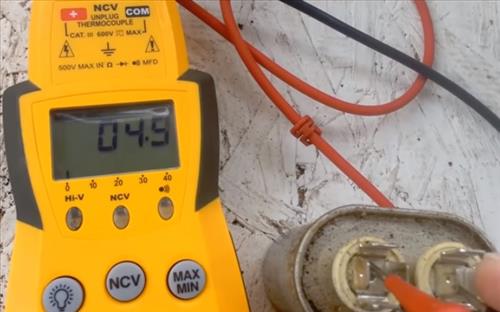 How To Replace a Start Run Capacitor
A new fan capacitor should always be installed when a new motor is installed. It is always a good idea to take a picture or write down wire coloring and connections.

How to Replace a Condenser Fan Motor on a Heat Pump Air Conditioner
Troubleshooting a Window Air Conditioner Not Blowing Cold Air
What Size Mini Split Do You Need?

Our Picks for the Best Mini Split Air Conditioner

How to Fix A Loud Noisy Heat Pump Unit
What Is the Best Way to Heat and Cool a Mobile Home?