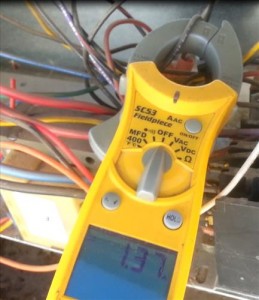 Checking the AMP Draw is important in HVAC for troubleshooting or testing for a potential problem.

Furnace blower motors and condensing fan motors Amp draw are checked to see if they are Over-Amping or, in some cases, Under-Amping.

Every electric motor has a set Amp and voltage rating that the motor should run at. This information will be listed on a name tag on the motor. Voltage can be 120 volts, 240 volts, and 460 volts; Amps can range from .01 to 20 amps or more. 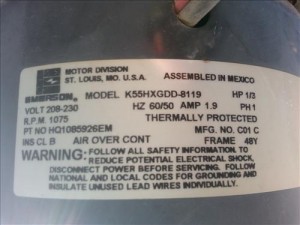 Amperage is a measure of power being consumed by an electrical device. Furnace blower motors and condensing fan motors will have the Amps labeled on a name tag on the motor. It can be simply labeled Amp, or in some cases, FLA (Full Load Amps), which is the max the motor is rated to run at.

When a motor Over-Amps, it is drawing more current than it was designed for, which will shorten its life and burn the motor up.

For example, if a condensing fan motor has an Amp rating of 3 and after measuring the amps, it is using 5-amps, you know there is a problem, and it needs to be fixed before the motor burns up.

An electric motor will get very hot when it is over Amping; possible causes are the Start Run capacitors.

Use the Correct Multi-Meter with an Amp clamp 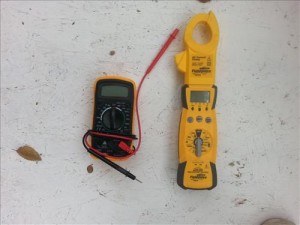 A correct multimeter needs to be used when measuring amps so as not to burn up the meter.

HVAC multimeters are specifically designed and often use what are called Amp-Clamps, where a clamp is simply clamped around one of the wires the motor is pulling power from, and it will display Amps. 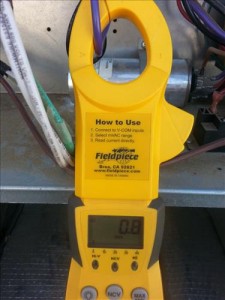 Multi-meters that don’t have what is called an Amp-Clamp which use the leads from the meter set in the circuit to measure Amps.

Be sure your meter is set up to handle the voltage and Amps required before doing this, or it is possible to burn up your meter and possibly be shocked.

How To Measure the Amps a Motor is Using

Take caution when measuring Amps or Voltage as HVAC has high voltage running to units. Also, be aware of moving parts such as the fan blades.

If you have a meter with an Amp Clamp, it will simply need to be clamped around a wire that is pulling power, which are the wires coming off the motor and going to the pole, 120 volts, 220 volts.

Only one wire is used to measure the Amps while the motor is running.

If you don’t have an AMP clamp but do have a meter that can handle the voltage and the Amps the motor is pulling it will need to be placed into the circuit.

For example, you have a 120 Volt 2 Amp furnace blower motor and need to measure the Amps. One of the wires for the 120 volts will need to be pulled out and placed on one lead. The other lead will go where the wire was pulled from, putting the meter in the circuit.