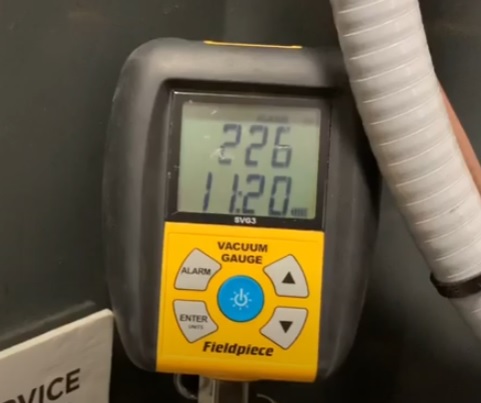 HVAC systems such as air conditioning units need a vacuum set on the system before refrigerant is released.

A good vacuum pump will remove airborne moisture and or non-condensable from the system and will boil off moisture.

The deeper the vacuum, the lower the micron level, which is needed for an HVAC system to last and work properly.

Below are some of the most frequently asked questions about micron levels in an AC unit.

Why Does an Air Conditioner Need a Vacuum?

If any water vapor is in the system, the icing up of capillary tubing and expansion valves can damage the system.

A vacuum will remove any small particles, including water vapor, that may be in the system.

What is an Adequate Vacuum Microns Level? 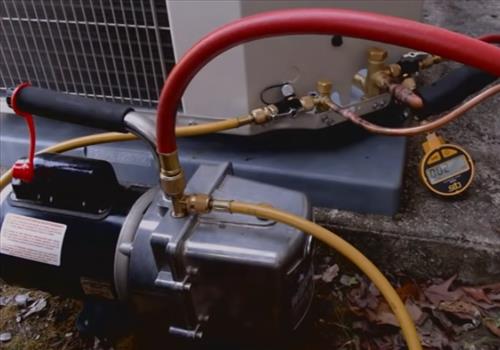 500 microns or more is usually considered the best level to have.

Some equipment manufacturers will have 300-400 microns listed as the least level to get to.

A good vacuum pump and micron gauge will be needed to get to 500 microns.

What is a Micron in HVAC?

Micron is a measurement of pressure in an HVAC system.

It is a very small measurement that can measure atmospheric pressure.

The original method to measure atmospheric pressure used a U-shaped tube with mercury inside the tube.

The pressure was applied to one side of the tube, which pushed the mercury up the other side, marked in inches.

This gave the name Inches of mercury which is still a widely used measurement.

How Many Microns is Good in an AC System?

Most HVAC technicians will attempt to get a system down to 200-500 microns with 500 microns the ideal range.

All equipment manufacturers will have a specified range that a system should be set at.

What is a Perfect Vacuum in HVAC?

1000 microns would be the perfect vacuum in an HVAC system.

While 1000 microns would be a perfect vacuum realistically, it likely can not be reached.

To get to this level, a very good vacuum pump, and electronic micron gauge will be needed.

The time needed to reach this level, even with a good pump, would also be high.

An analog mechanical gauge will not work to read this level or be very difficult.

A micron gauge should be attached directly to the system and isolated from the pump to get the most accurate reading.

Summary
Vacuuming down an AC unit to the proper microns is a necessary part of fixing an HVAC unit.

A good vacuum pump and micron gauge will be needed to read very low levels accurately.

It is also best to follow the manufacturer’s specification and suggested level for the microns needed.

If in doubt, 500 microns is usually considered best for most HVAC systems, such as air conditioners and mini split systems.

Do you have any suggestions or questions on ideal micron levels in an HVAC system? Let us know your thoughts below.